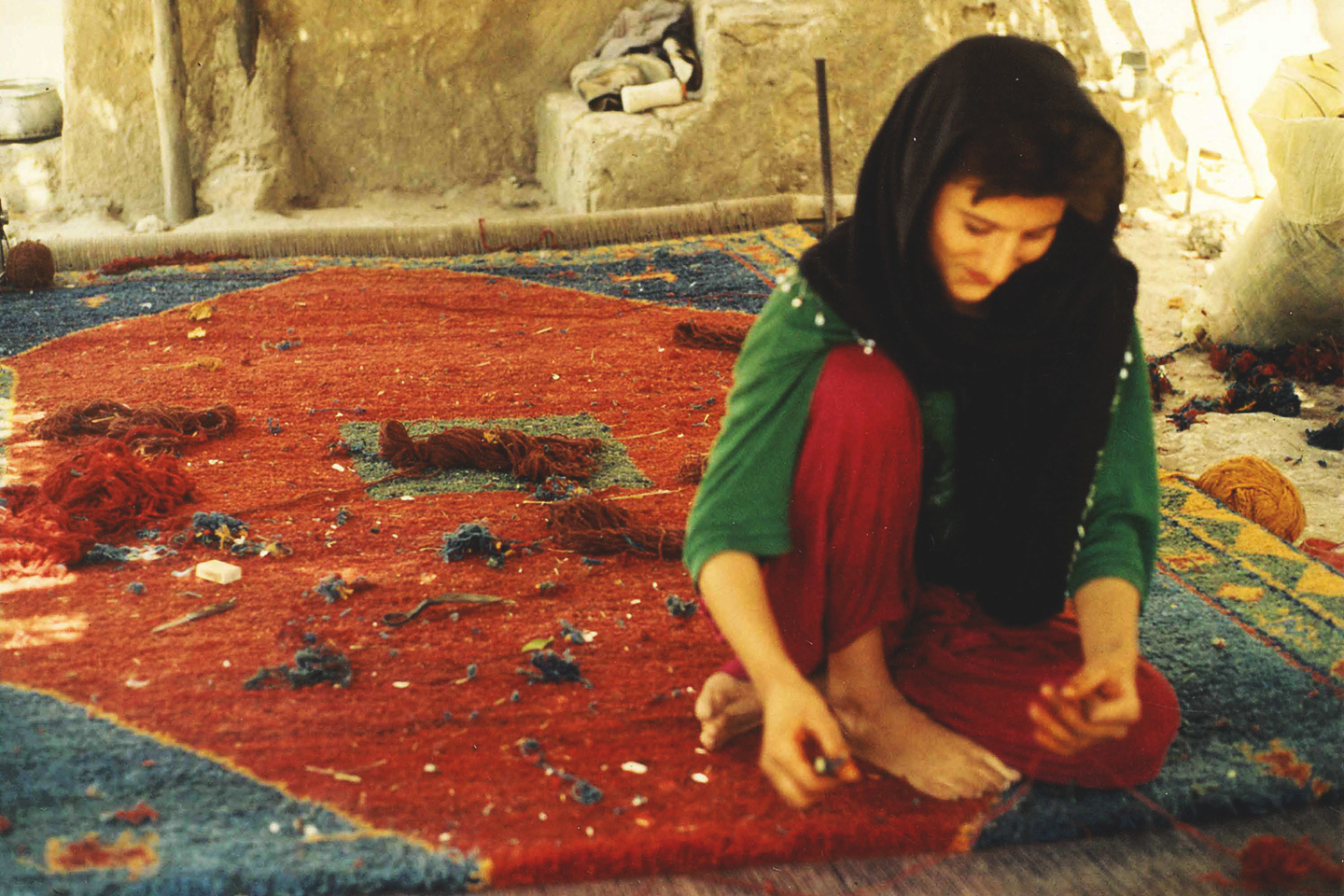 Gabbeh rugs are fabulous. The wonderful colors, the rich silky wool, and the minimal designs have inspired countless rug lovers! But just what is a “Gabbeh“? Good question! I am asked this question at least once a week and while trying to formulate a concise response, I decided it might be best if I were to write it down here first. Gabbeh refers to a style of rug. But today, there are many different iterations of the “gabbeh style” so the term has grown to encompass many different rugs.

In a way, the complex history of the gabbeh rug accurately charts many of the trends and changes in the rug market in general from the 20th to the 21st century….. An under appreciated indigenous tribal rug is discovered. Enterprising rug producers experimenting with natural dyes modify and adapt an indigenous textile for a global market and score a big hit. Rug producers in other countries find inspiration from this hit and create their own variations and adaptations.

History: The late 19th century gabbeh rugs were woven by tribal weavers who live in the majestic Zagros Mountains. This mountain range (the largest in Iran) rises up to nearly 15,000ft and is often covered in snow. The Qashqai, who are the tribe most associated with weaving gabbehs, are centered in southern Iran near the historic city of Shiraz. But other tribes, such as the Lurs, the Kurds and the Bahktiari also weave these carpets.

The term gabbeh comes from a Persian word meaning raw, natural, uncut or “in the rough”. As such, it was more of a descriptive term. The 19th century gabbeh rugs were very coarsely knotted (40kpi or less) with long (sometimes shaggy) pile. They were woven relatively quickly without the need for large looms. In addition, most of these rugs had wider rows of multiple wefts which rendered the rugs rather floppy and a pliable. This allowed for them to be used not only as floor coverings but also as wraps or bedding to help insulate against the bitter cold of the mountains. 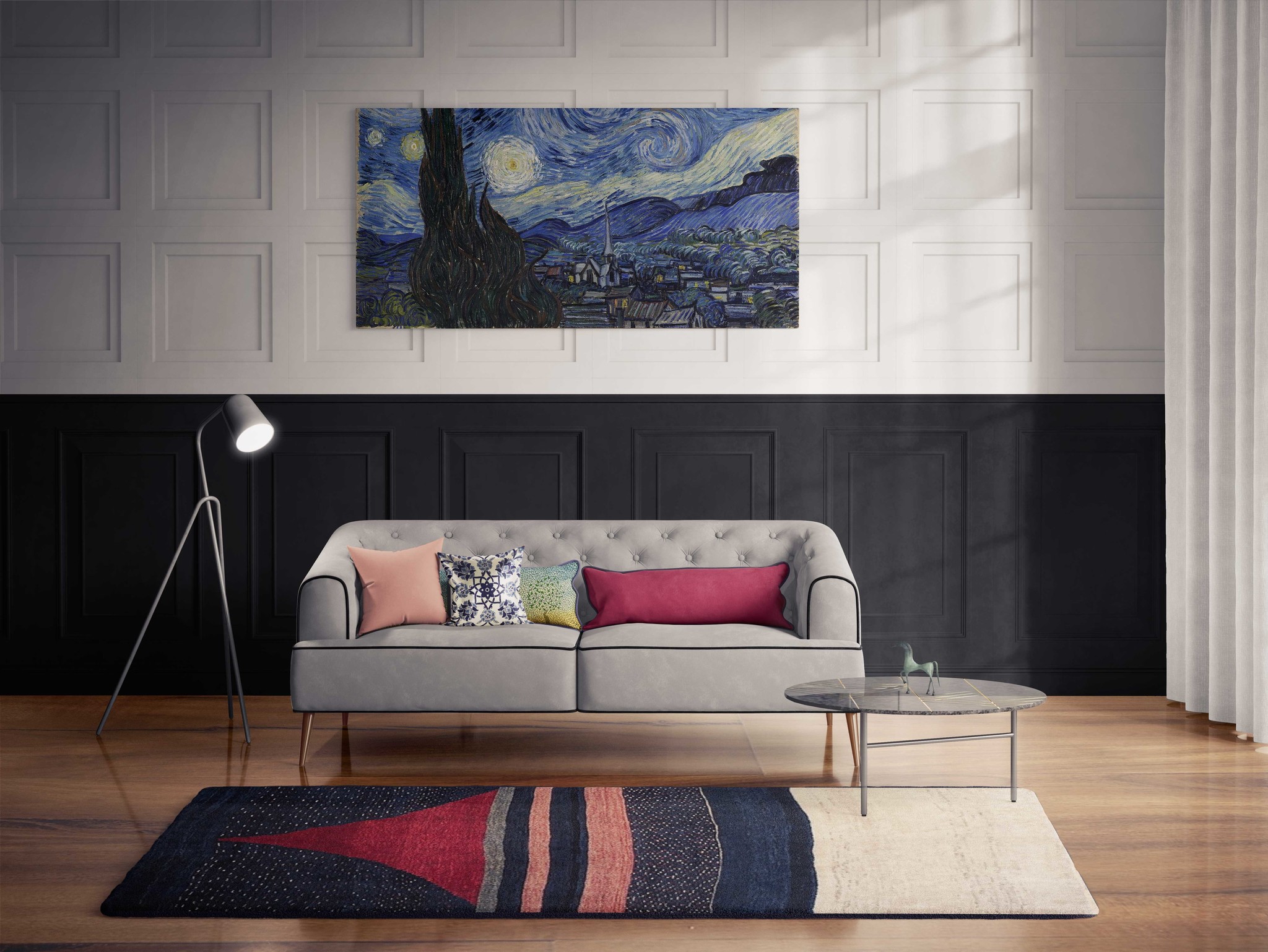 These rugs were purely indigenous and utilitarian tribal textiles that were not intended for the carpet trade. The earlier examples had rich saturated natural dye colors and bold graphic designs. Often a chain of several diamond motifs were depicted in bright primary colors. Or, more complex designs were often abstracted to their basic elements in these rugs. During the early and mid 20th century the bright primary colors were often forsaken for raw, un-dyed natural wool. By this point, the use of natural dyes was becoming forgotten and replaced by garish synthetic dyes. At this time, gabbeh rugs became even more plain in design. Often a field of natural un-dyed wool and stylized zoomorphic designs; goats, camels, dogs, horses and donkeys and often large tigers were often depicted in these simple rugs.

The 1960s and 1970s saw huge political and social changes and many young people started traveling the “hippy trail”. This was the overland route from Europe to India, which at the time was open and safe to travel. This route led directly through Iran. These young travelers loved the abstract boldness of tribal designs. Many collectors and textile dealers discovered their passion during this remarkable (and today impossible) migration. Some of these travelers would have seen and purchased the odd gabbeh rug that ended up in the bazar of Shiraz. Tribal rugs had starting to be valued, purchased and even collected! 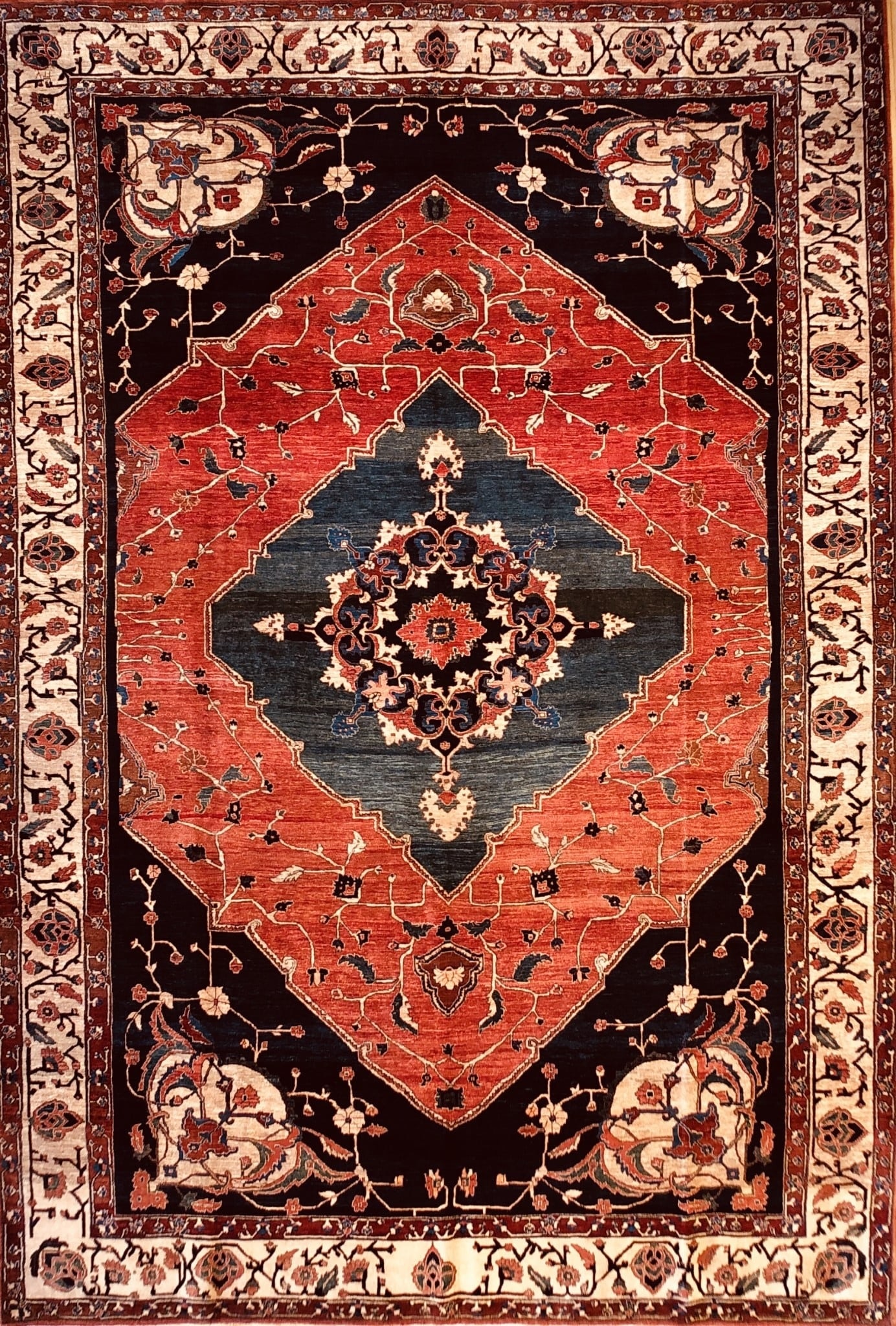 Fast forward 20 years. In Turkey in the 1980s, early pioneers of the revival of the art of the natural dye were making significant inroads into the rug world. Dealers recognized that a return to tradition, a return to the use of natural dyes, would bring new life into the tired and bland rugs that were being produced at the time. And in Iran, the art of the natural dye might have been completely lost had it not been for the dedication of one man, Abbas Sayahi.

Abbas Sayahi (who would latter go on to star as “uncle” in the 1996 feature length film “Gabbeh”.. but more on that latter) was a one-man natural dye zealot; holding out for years over nay-sayers and perfecting his skills as a master natural dyer. From his workshop in Sultanabad (the village next to Shiraz and a famous rug weaving center) he continues to make glorious colors in his huge dye house. But, in 1980, many thought him misguided and anachronistic. However, when it was noticed that rug producers elsewhere were gaining success with natural dyes some Iranian producers became intrigued. And they had a step-up compared to other countries where dye recipes had been totally lost or forgotten and needed to be reinvented. The rug producers in Shiraz had a living dye master with a full rainbow of fine natural dyes at his disposal. 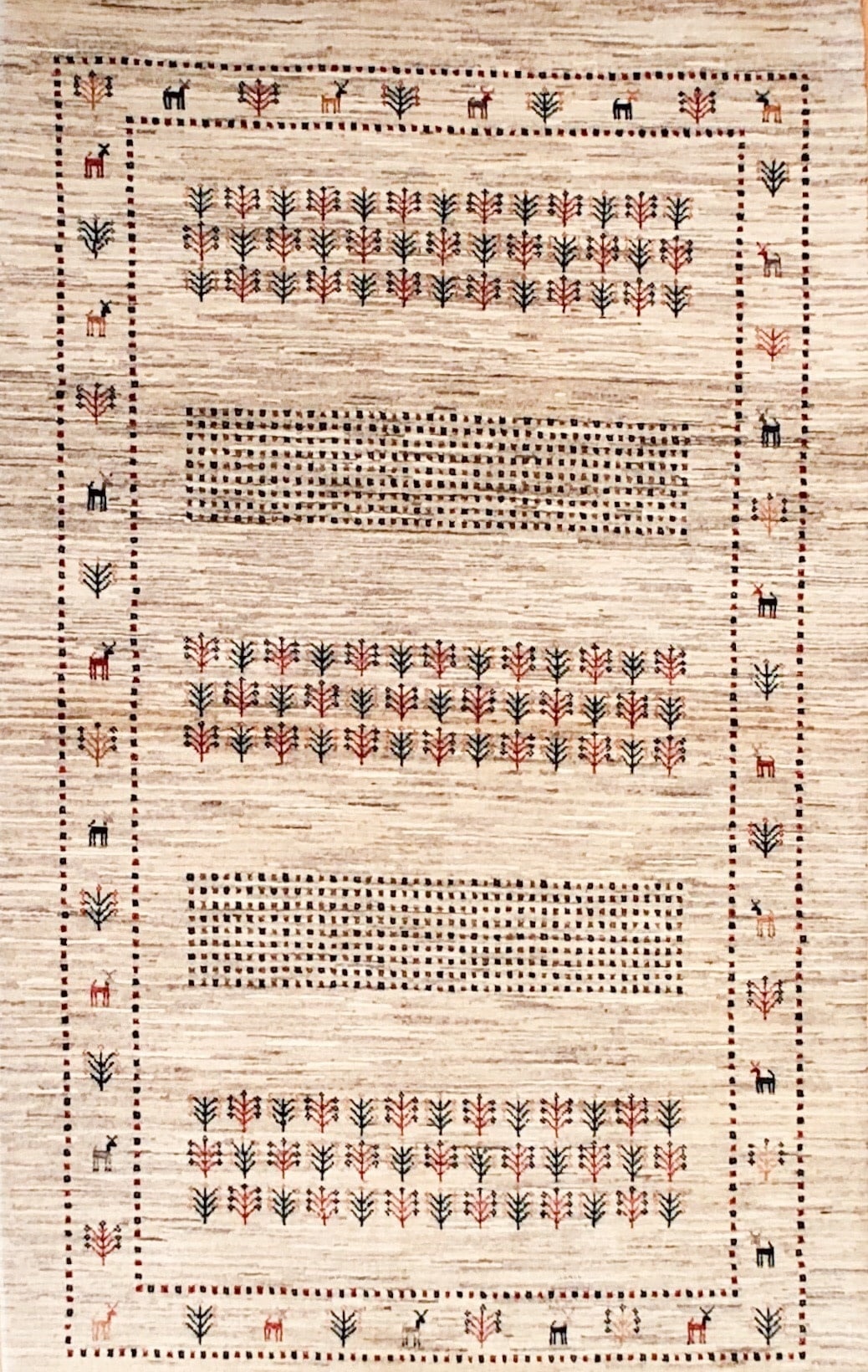 Now it is time to introduce the man who’s name has become synonymous with the modern gabbeh: Gholam Reza Zollanvari. Although he was not the first, nor the only producer to recognize the commercial possibility of the gabbeh rug, he has been the most prolific and successful. Having learned the family business from his grandfather who owned a small retail shop in the Shrazi rug bazar, he has turned the named Zollanvari into a globally recognized brand. The nomads of the Zagros mountains provided the very best silkily, fleecy hand spun wool and a ready compliment of weavers. And with the excellent natural dyes being created by Abbas Sayahi, the next logical step was to update the woven structure of the gabbeh rug from lose tribal blanket to thick and meaty floor covering.

This next generation gabbeh did away with the multiple wide wefts to create a more compacted carpet. And  although these rugs were still extremely thick (sometimes up to 3/4″ thick) they were now made with tightly compacted wefts and crafted with an even shorn finish. The goal was to retain the authenticity and charm of tribal rug while creating a commercially viable product. These earlier second generation rugs were often in one primary color: rich red, dark blue, shimmering green and the most glorious marigold yellows. The weaving tended towards a more coarse 40-60kpi weave. And the designs were simple; often a mono-chromatic field with several camels, horses or folkloric scenes. Or perhaps a simple banded design in various colors or simple geometric checker-board motifs, etc.. Like great jazz music, these carpets had a wonderful sense of improvisation. These carpets were alive and you could feel the weavers’ spirit playing within the structure of the composition. Needless to say, these rugs were a big hit!

In short order, producers such as Zollanvari (and others) started experimenting further with the weave of these rugs. Finer and finer gabbehs were created with knot counts of 200+ kpi. To add to the confusion of rug nomenclature, the different grades of weave were given specific names such as “Loribaft”, “Amaleh”, “Kashkuli” and others. These finely woven gabbeh rugs brought an added layer of sophistication and refinement while still maintaining a wonderful tribal looseness. Thousand and thousands of spectacular rugs were to follow and by the 1990s, the gabbeh rug had risen from tribal artifact to essential home furnishing in the most fashion forward homes. 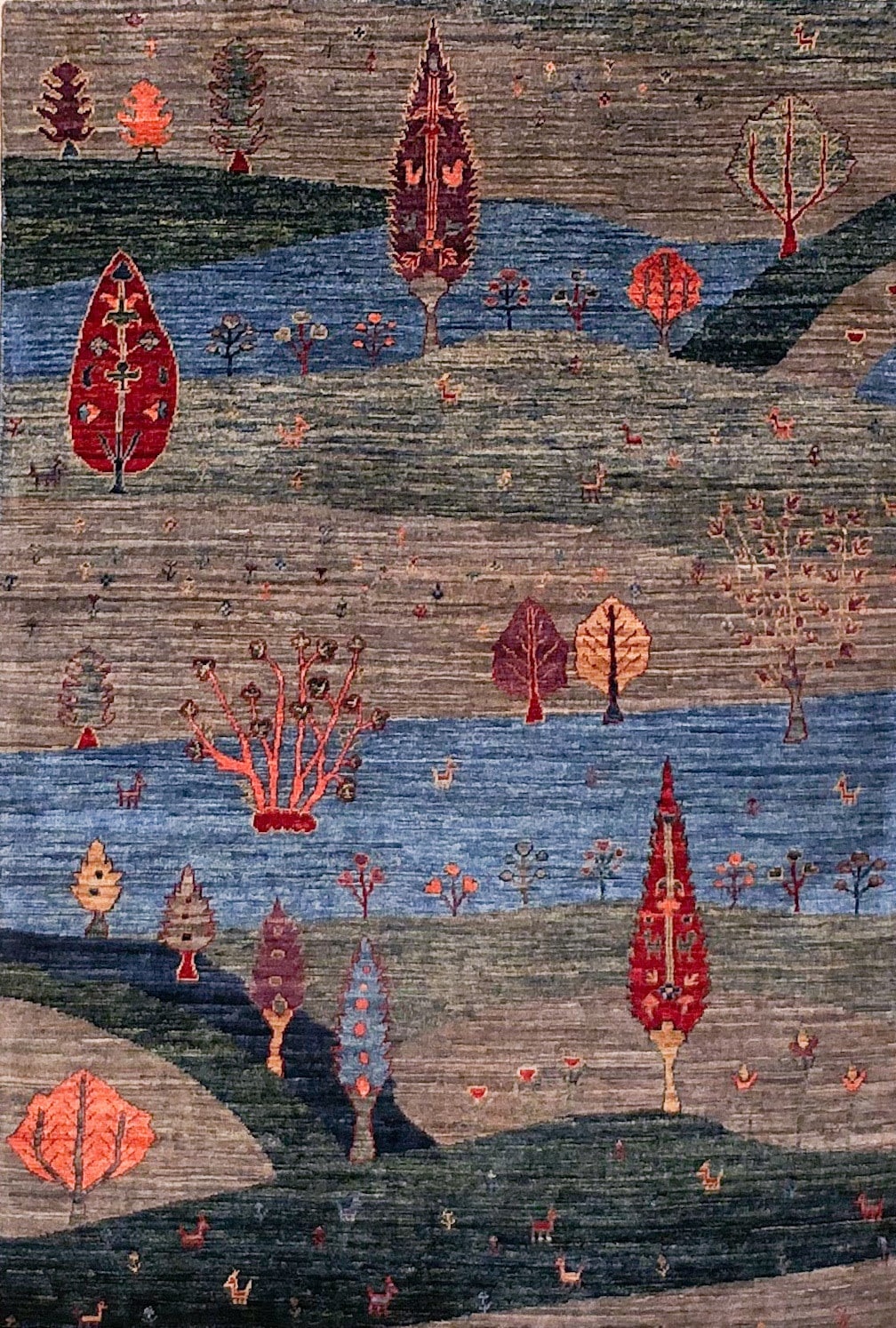 Around this time, one of Iran’s greatest film director (in case you don’t know, Iran has an extremely sophisticated film industry), Mohsen Makhalbaf, had the idea to create a film about the tribal people of Southern Iran. He released “Gabbeh” in 1996. It is somewhat of a “magical realism” story in which a gorgeous gabbeh rug that is being washed by an elderly couple comes to life in the personification of a beautiful young Qashqai woman. Her life, which is depicted in the rug, is played out in the movie and she interacts with the elderly couple. In this movie, Abbas Sayahi was given the role of “Uncle” to the young woman. There are some unforgettable scenes where Abbas is pictured in fields of wild flowers and he poetically describes his “rang” (Persian for color). With the success of the film, gabbeh rugs grew even more beloved.

The year 2000 brought a new Millennium but also the end of a decades long U.S. embargo of rugs from Iran. Gabbeh rugs were hugely successful in Europe before this, and many of these rugs had found their way into the U.S. through circuitous routes. The early 21st century found container upon container of these rugs shipped to the US. The designs evolved and grew. Some western designers began commissioning their own collections. The rugs began to resemble sophisticated abstract art such as Rothko paintings. Producers in other countries such as Nepal, Pakistan, Afghanistan and India stared making their own versions of “gabbeh style” rugs. Some were more successful than others. At this point, I would argue that the term “gabbeh” became less specific and more of a broad descripiton for a variety of modern rugs with a certain tribal “improvisational” sensibility. 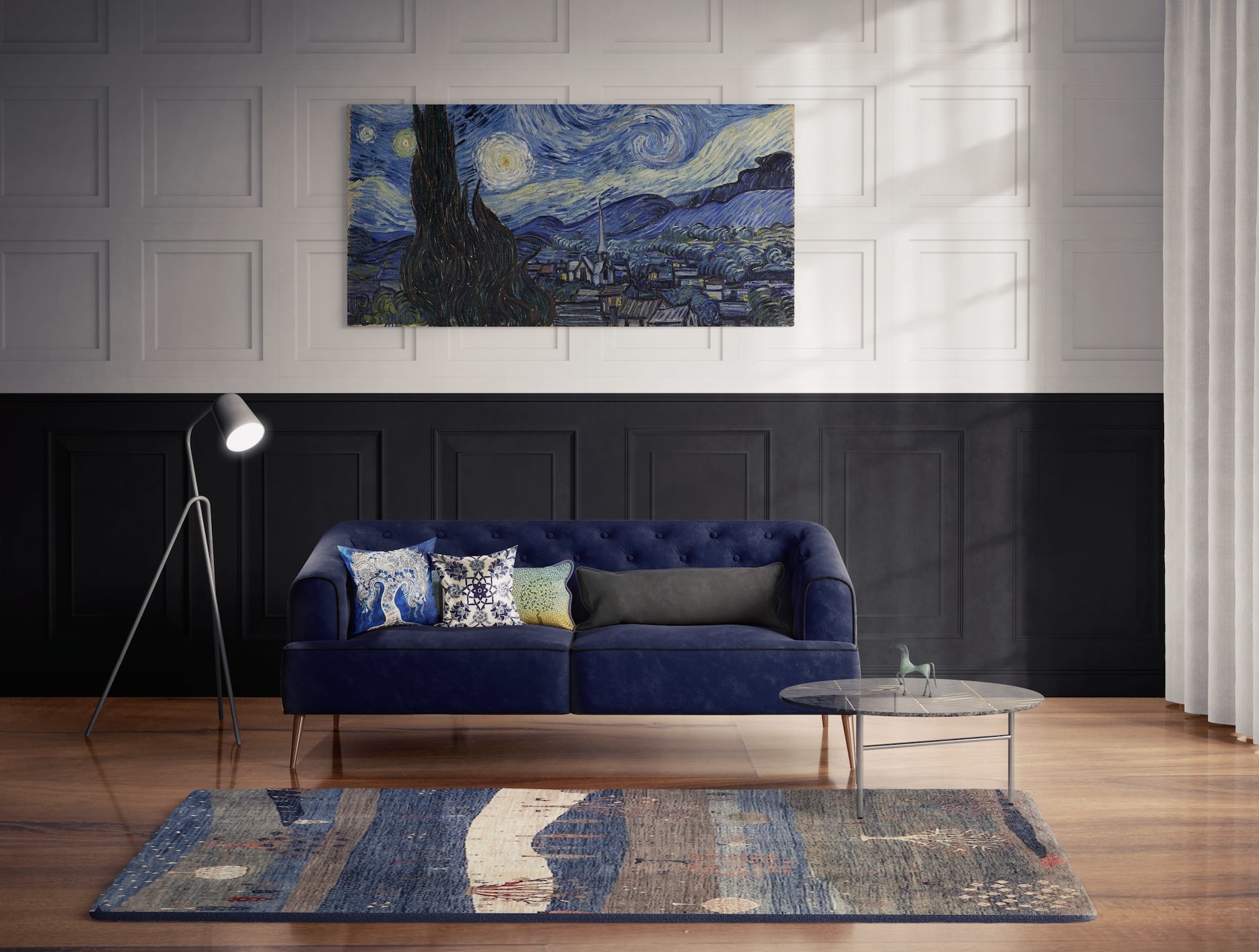 By 2005 we saw the price of gabbeh rugs rise dramatically. In Iran, as in other rug weaving countries, the once plentiful ranks of  skilled weavers began to diminish. Younger generations were not interested in weaving and preferred other “modern” lines of work. Many rural people chose to move to cities for jobs. This pattern continues in other countries too and the art of weaving is rapidly being lost. Additionally, the cost of raw materials went up dramatically with wool doubling in price as well as steep increases in the cost of natural dyes (madder root, etc.).

But the greatest misfortune was yet to come. In 2010, with political tensions growing between the US and Iran, the US government again enacted an embargo barring the import of any rugs from Iran. With only several months of advanced notice, the large whole sellers (such as Zollanvari) sent over as many finished gabbehs as they could ready. But by now, most of those stockpiles are depleted.

And yet, the story of the gabbeh rug continues to evolve. Persian rug producers further refine and innovate these rugs (although for a non U.S audience now). And hopefully politics will again shift to allow us to import rugs from Iran in the future. But there is also the congruent narrative of the gabbeh “style” rugs being created in other countries. I have argues that the term gabbeh has grown into much more of a general description. The rug was greatly altered by market influences and imaginative producers. Weavers in India, Pakistan and Afghanistan have making gabbeh style rugs for several decades. Sometimes these have been denigrated as cheap knock-offs (and at times rightfully so). But, there are also some beautifully crafted gabbeh style rugs from other countries as good as anything made in Iran. 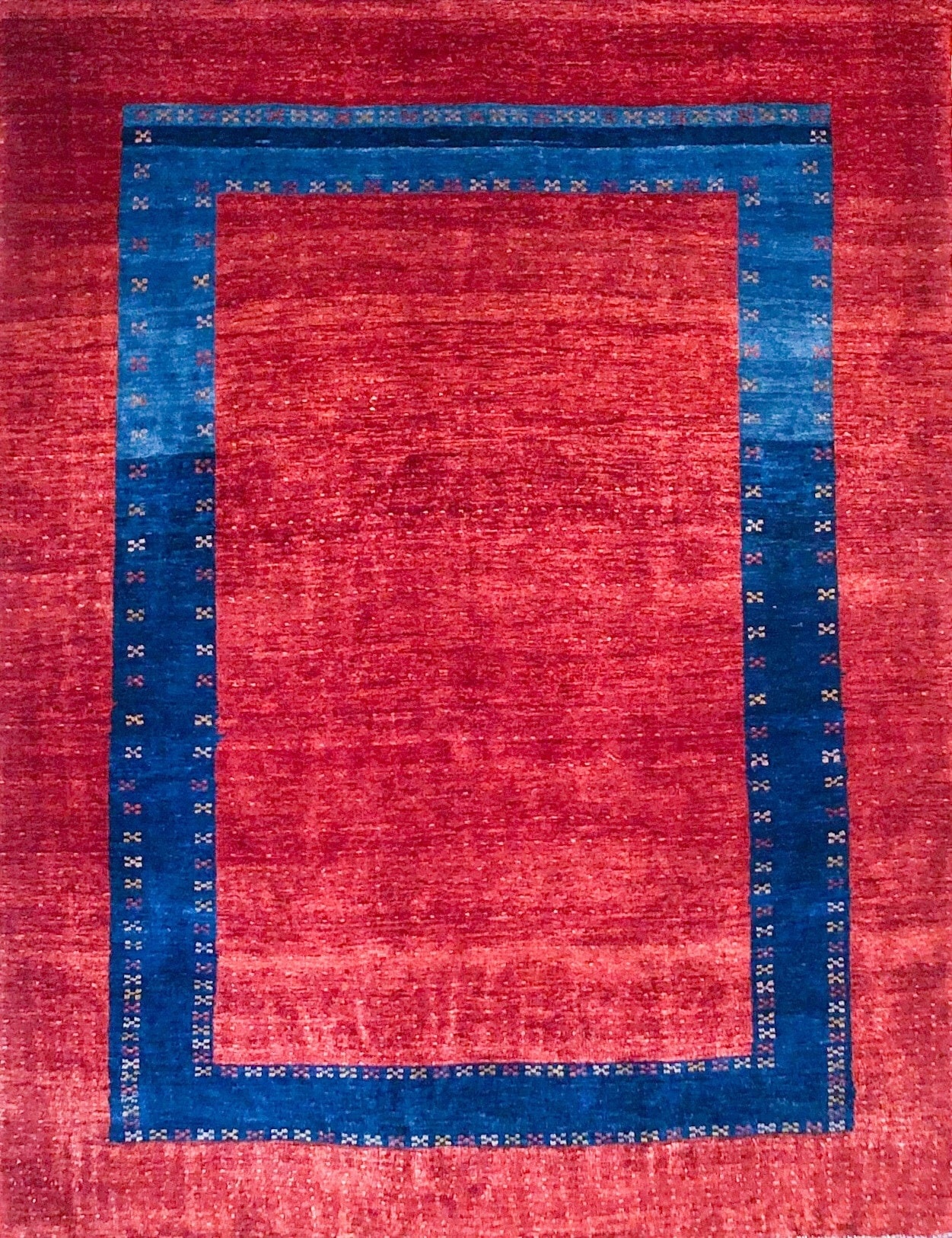 For example, there is a whole line of Afghan rugs that I call “natural gabbehs”. These rugs are made with entirely un dyed wool. The colors are derived entirely from natural wool colors that have been sorted and separated into various hues of ivory, grey, brown and black. They are wonderful and sophisticated and solidly well made.