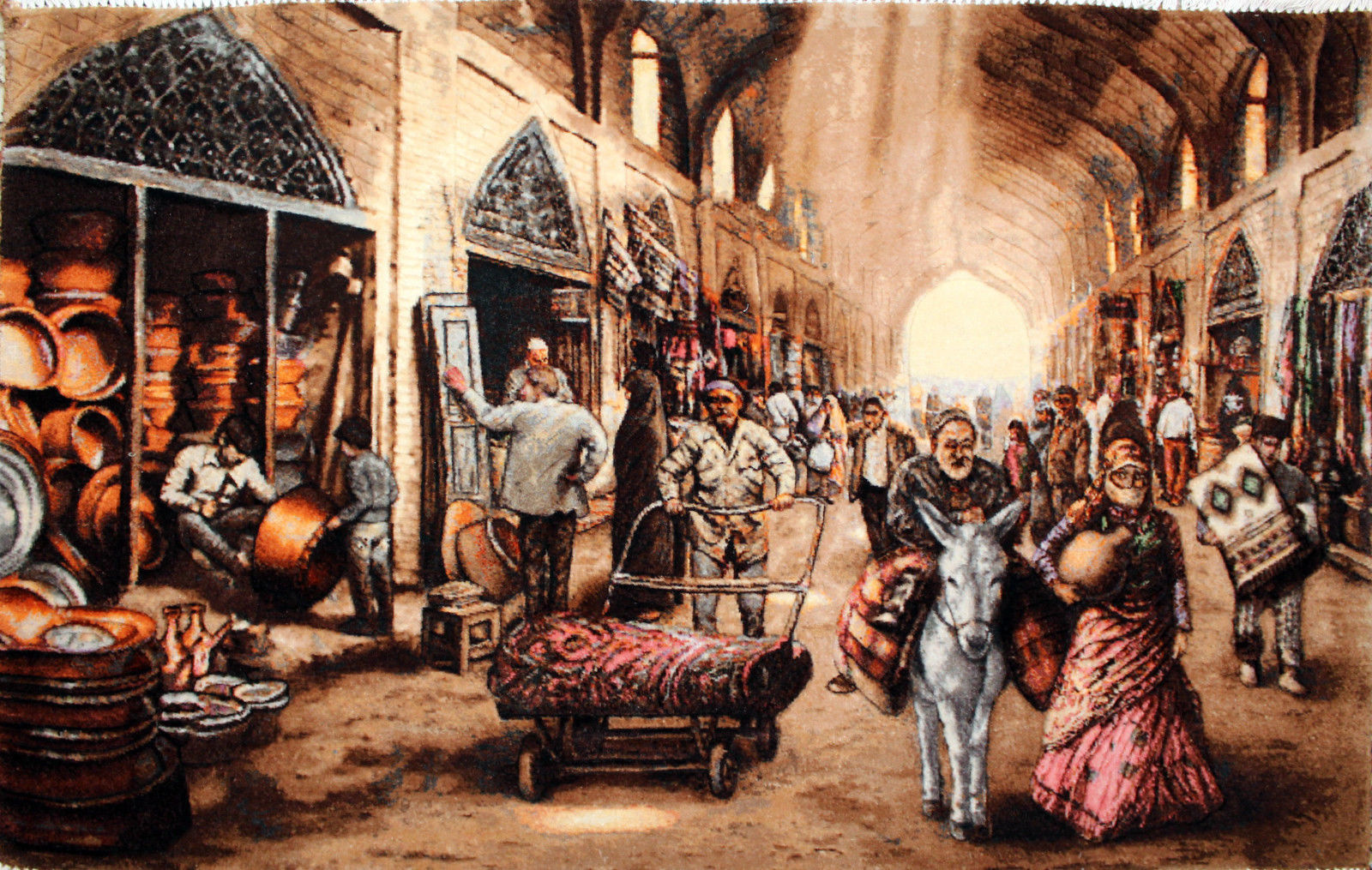 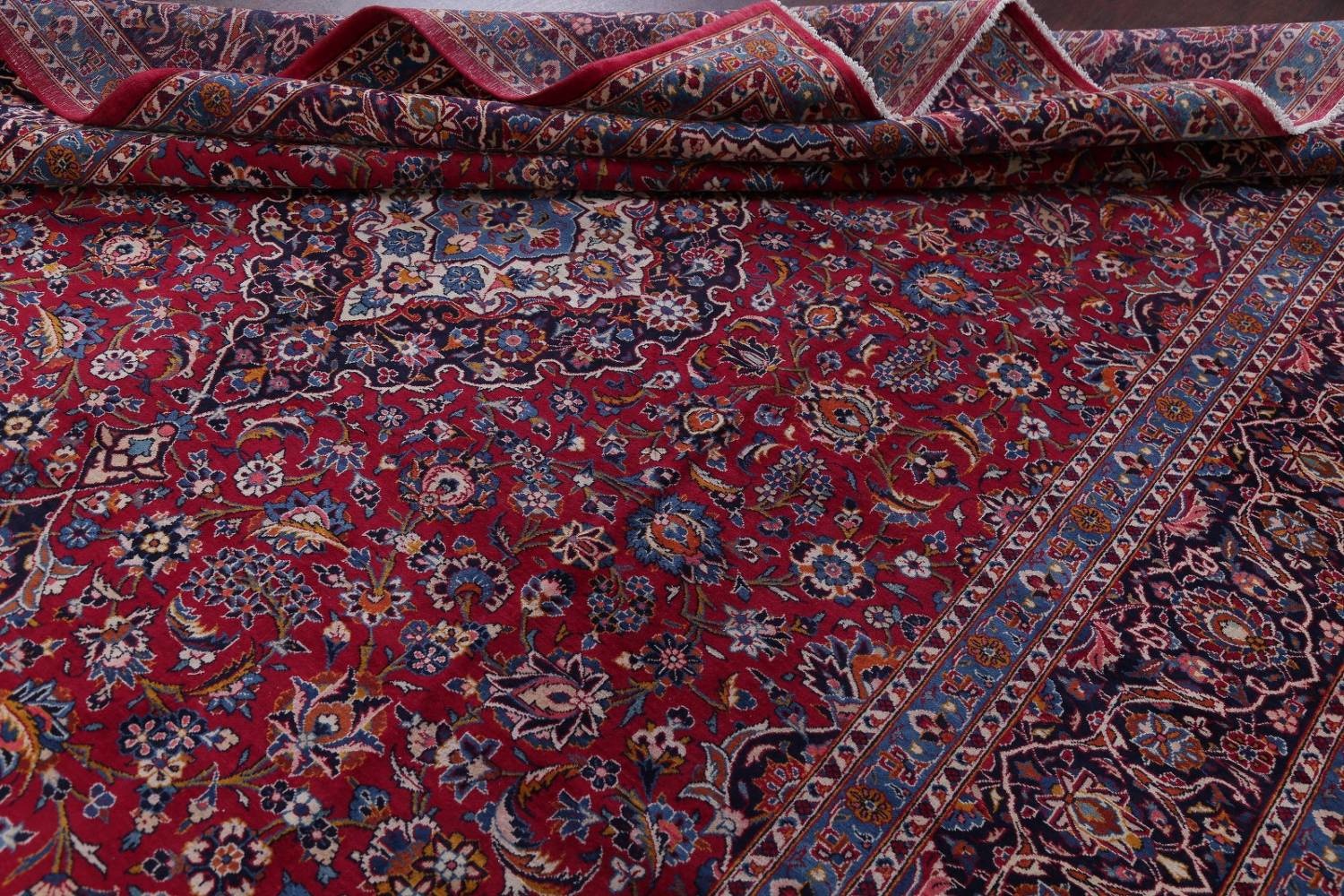 Kashan is an ancient Town 160 miles from Tehran (Iran), near the great desert Dasht Kavir. This city has a long history and archaeological finds revealed that this region was one of the primary areas of civilization in the prehistoric era. Kashan has a long history of weaving during the Safavid dynasty. Many of the Kashan rugs can be found in the royal courts in Europe. The famous 'Ardabil' carpet, now in the Victoria and Albert Museum in London, was made in Kashan around 1539 so the tradition goes way back. Carpet production actually stopped in the 18th century. It was started again in the late 19th century by merchants who had the idea of using imported merit wool for weaving. The practice spread rapidly throughout Persia, though Kashan itself now uses locally produced wool as well. Rugs woven from Marina wool are called Kurk Kashan and attract higher prices.

Kashan weaver favors classical elongated Medallion designs with Corner decorations, prayer arches with hanging lamps over monochrome fields and rugs covered with vase motifs, or birds and flowers. Borders are always beautifully patterned and, if inscribed, usually increase the value of a rug. Dyes are of very high quality, and warm reds and indigo predominate.

Kashan is also famous for its silk brocades, and so it's not surprising to learn that find silk rugs are woven here too. Whether silk or wool, all Kashans are delicately patterned, with the lustrous, silky pile.

Wool Kashan has cotton warp and weft threads, though silk pile rugs are often woven onto Silk. rugs are woven with the Persian knot.

The predominant red-blue palette is what we would expect of a Kashan rug from the early 20th century. Thank however the extraordinary range of pale blues, vivid greens, pinks and other colors within the field is also something one associate with the best Kashan weaving.

all about weaving Kashan rugs 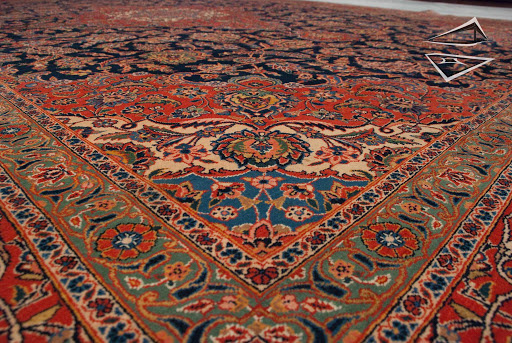 The Kashan wool is dyed using both synthetic and natural dyes and hangs out to dry. The coloring of the wool requires skill and experience to attain a correct shade. The weaving of rugs is done both in-home and at workshops with employed weavers. The looms they use a vertical and in workshops, the looms are large enough for several weavers to work simultaneously. Above them hang various shades of different colored yarn. Before them, the pattern they work meticulously from its set on cardboard. Besides the loom only three different tools are used; a knife with a hook on the end, scissors, and a heavy metal comb. First, the weaver takes a piece of yarn threads it around to walk threads tightens it cut off the excess yarn. In Kashan, the Persian knot is used in making of their rugs. Once in the entire line is completed one or more weft threads are threaded between the warp threads after. After which the heavy comb is used to pack the layer of knots and wefts together. The work continues row after row for a number of months until the carpet is finished when it is cut down from the loom and warp threads are tied together to form the fringe. After this, the carpet is washed and left out in the sun to dry. Kasha has been well known for its quality textiles. Commonly they are made using high-gloss wool, which gives a velvety finish to the rug.

You can place the Kashan rug almost everywhere in your home since it lightens the room. It is recommended to place it in the dining room since it can stand the wear from furniture being moved. For example chairs, and then you can also get away with a stain.

'Ardabil' the most famous Kashan rug 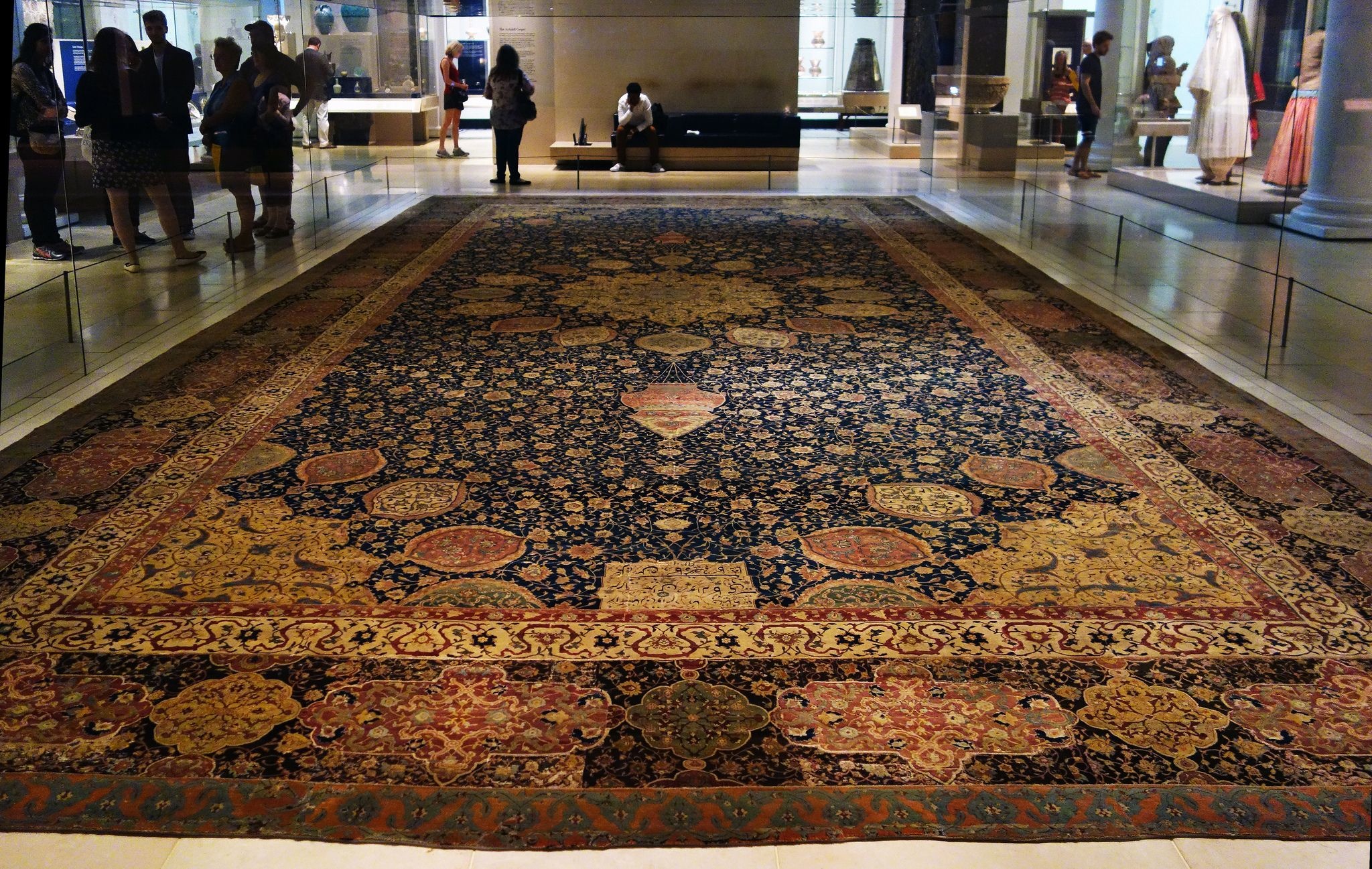 Translating this data into the Christian calendar shows that the carpet was woven around the years 1539–40 during the reign of Shah Tahmasp, one of the great patrons of carpet weaving.

The design of the central medallion resembles that of the interior side of the dome of the Sheikh Lotfollah Mosque in Isfahan, with two differently sized lamp motifs surrounding the design, now seen as a deliberate use of graphical perspective, when looked at from the end with the smaller lamp the two appear the same size. However, a debate exists due to the fact that there is no proof that a graphical perspective was used in the 1530's Iran and other historians and critics instead believe the lamps are ones found in mosques or shrines at the time. The border is created from cartouches filled with decorations and calligraphy, adding even more details to the already accomplished style. 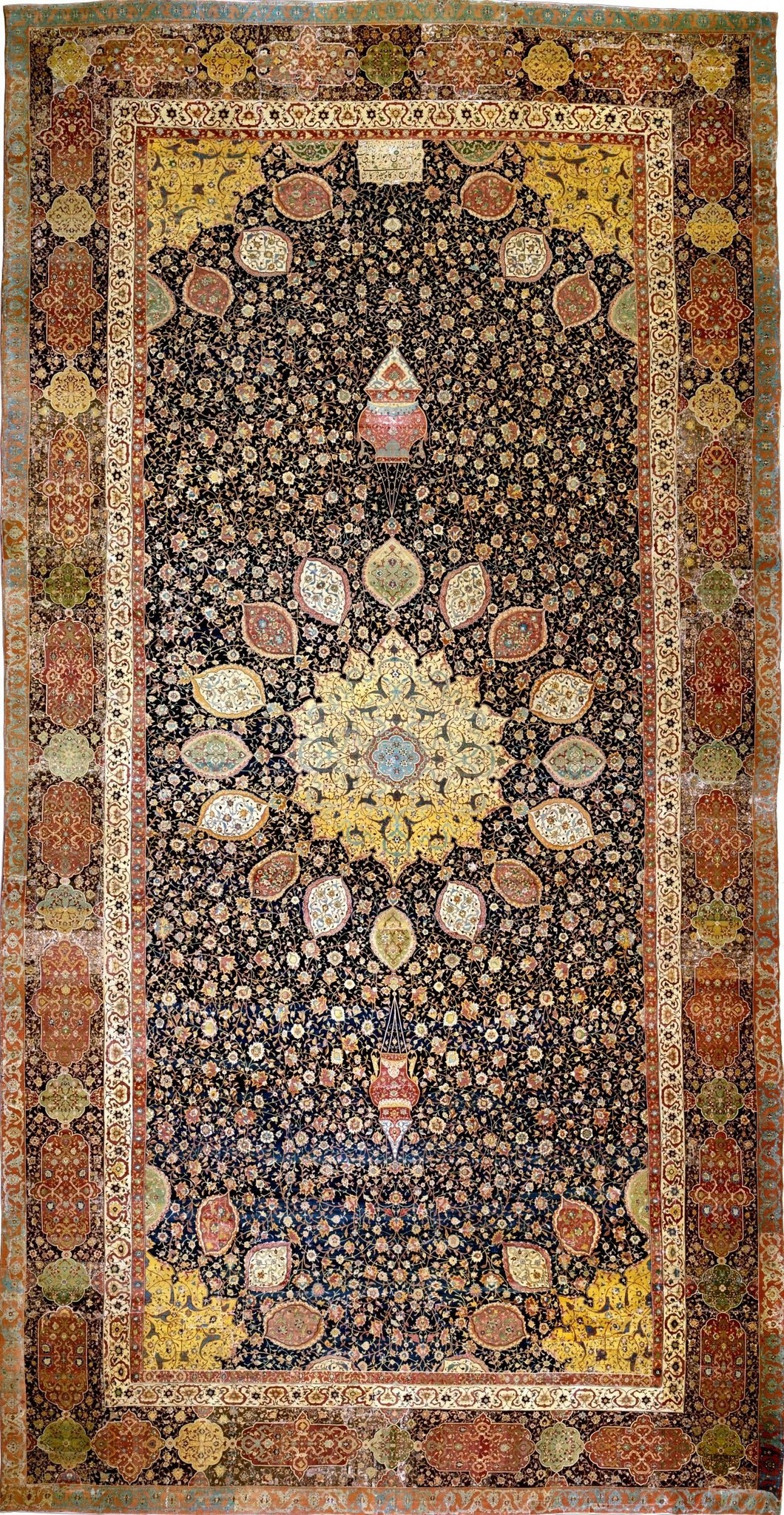 The foundation is silk with a wool pile of a knot density at 300–350 knots per square inch (47–54 knots per cm2). The size of the London carpet is (10.5 m × 5.3 m), which gives it about 26 million knots in total. The carpets have an inscription: a couplet from a ghazal by Persian mythic poet Hafiz Shirazi and a signature. The inscription reads:

I have no refuge in the world other than thy threshold.
There is no protection for my head other than this door.
The work of the servant of the threshold Maqsud of Kashan in the year 946.