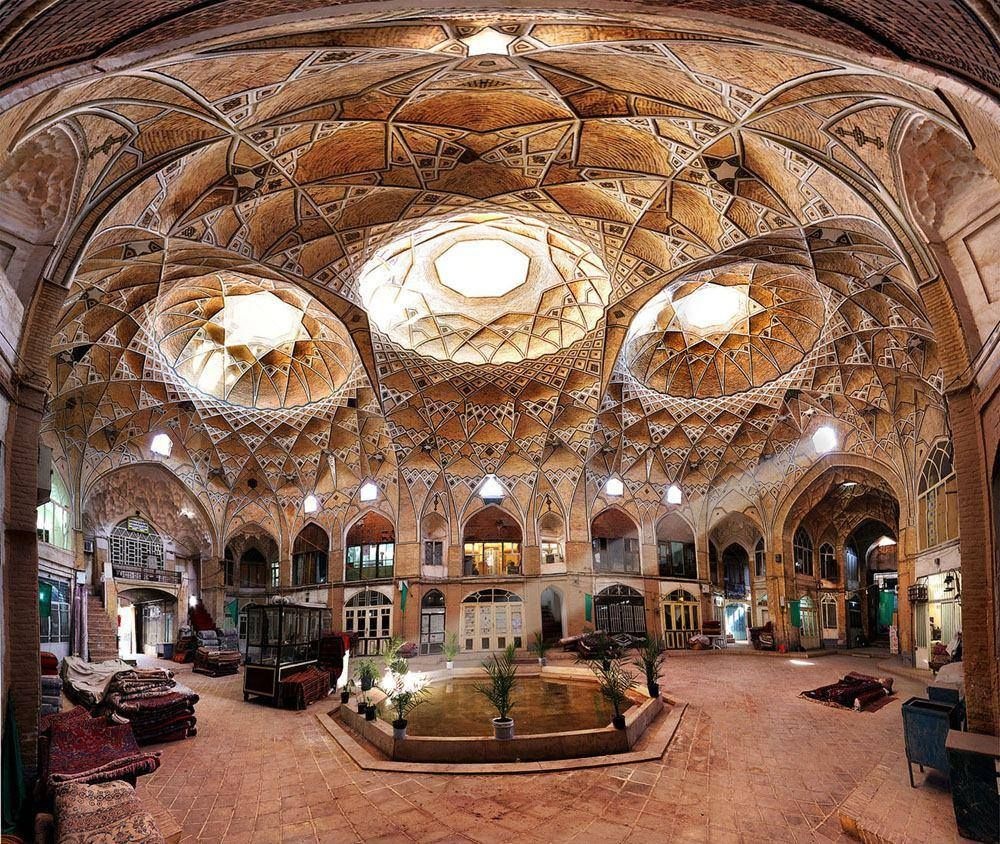 Qum an ancient town in Iran

Qum is an ancient town in the south of the Tehran region in the center of Iran. It's carpet industry, however, was not established until the 1930s, when the looms were set up within the town itself, not in neighboring villages as is more usual in Iran. As a comparatively new weaving center, the town has no traditional designs of its own but borrows instead from neighboring regions - in particular Senneh, Kashan and Isfahan. This is not to say that Qum rugs are without originality. They combine design elements from various traditions, maybe the border of one with the field of another, to create unique patterns.

The most popular patterns are the classic garden design striped rugs in which lines of color and ornament run the length of the carpet; illustrative carpets depicting birds, animals and hunting senses (details usually picked out and silk), and prayer rugs. Most Qum rugs have an ivory background, often combined with pink and a particular shade of light green which is extremely rare in other Persian Oriental carpets. 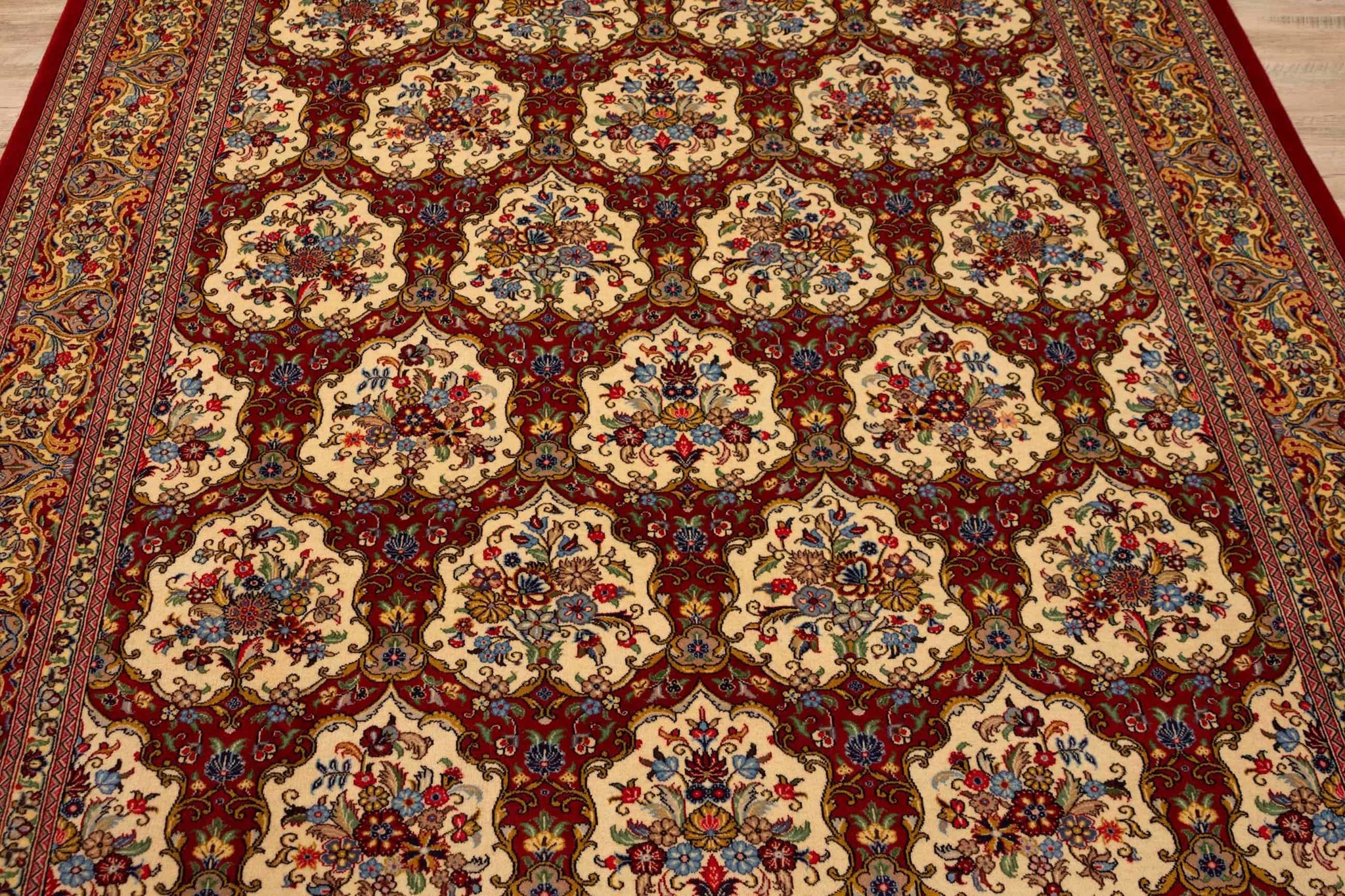 Qum rugs are not as delicate as those from Kashan or Isfahan but are still amongst the finest in Iran. In the last 40 years the town has begun to produce part silk and pure silk rugs which have enhanced yet further their reputation amongst buyers. Warp threads are sometimes silk, and in some rare carpets, the weft threads are silk as well. Qum rugs are also woven in silk and wool on a wool warp and cotton. Rugs are woven using the Persian knot. Sizes range from 6’10* 4’3 up to 9’9* 13. The knot density of Qum rugs ranges from 300 thousand to 1.2 million knots per square meter.

Rugs from the holy city of Qum do not apparently pre-date the twentieth century; certainly, none of the surviving Safavid carpets have been attributed to it. In the modern era, Qum has become renowned for its silk rugs and one of the best-known designs is a single large Lily elegantly and sinuously drown as here and surrounded by floral sprays. The palette of this rug, however, especially its dark blue ground, is a little unusual. 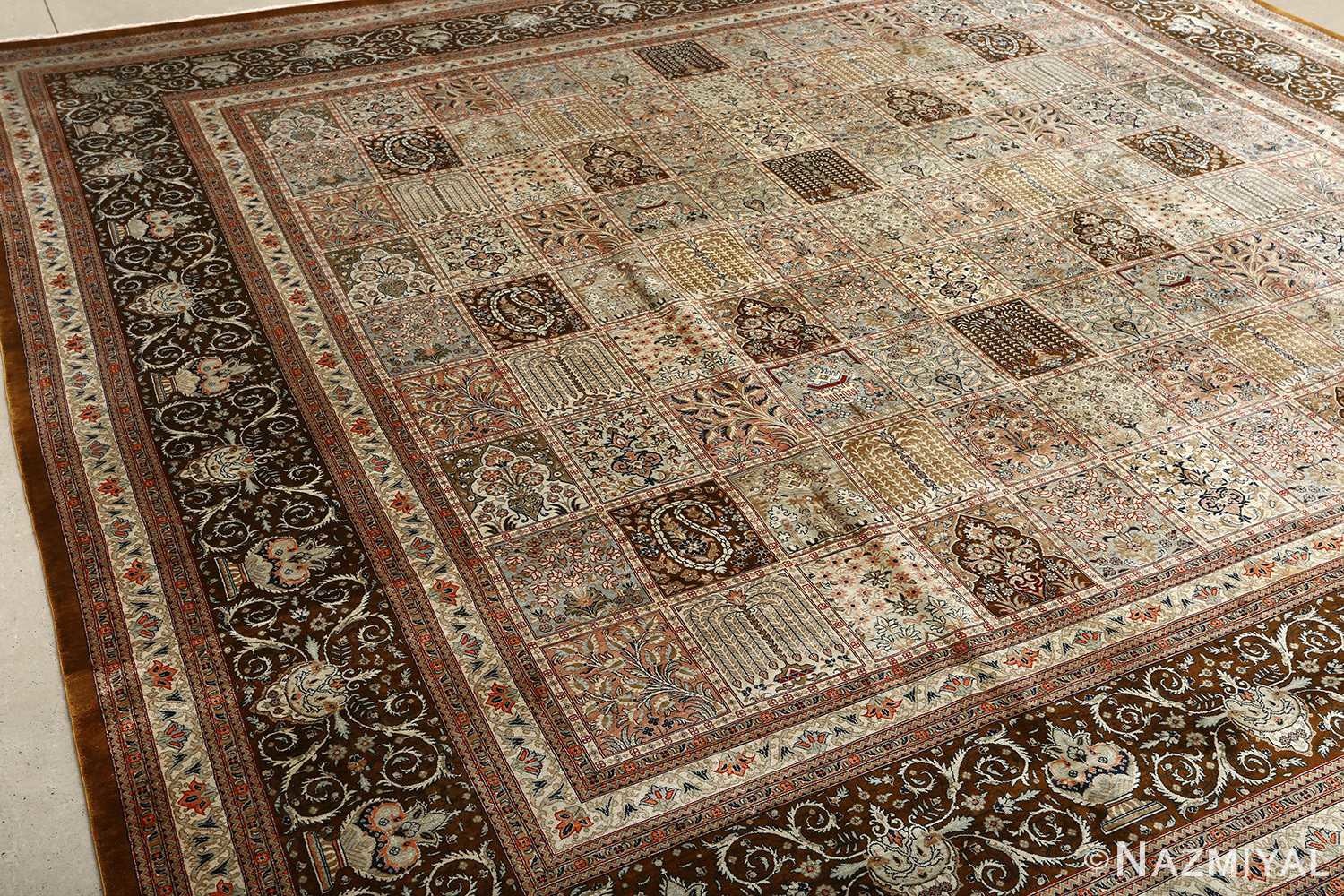 The tools that use only consist of a knife with a hook on the end and a pair of scissors and a heavy comb for which to pack the rows of knots together. The Qum weavers begin by taking a piece of yarn which they thread around to warp threads before tightening it and cutting off the excess. The pattern is checked regularly to ensure that the right colored yarn is used in the right place. The Qum weaver uses the Persian knot and continues knot after knot until the entire row is finished. Once done to thick pieces of weft thread are threaded between the warp and then the knots and the weft are packed together using the heavy comb. This is done to keep the knots in place. The work is inspected periodically and no errors are allowed. Skilled Qum weavers can handle about 8000 knots per day on a rug with a width of a hundred centimeters and a knot density of 1 million per square meter. The Qum weaver can complete 8 million meters per day. If the rug is 150 centimeters long it takes 2000 days or approximately 1 year to complete. 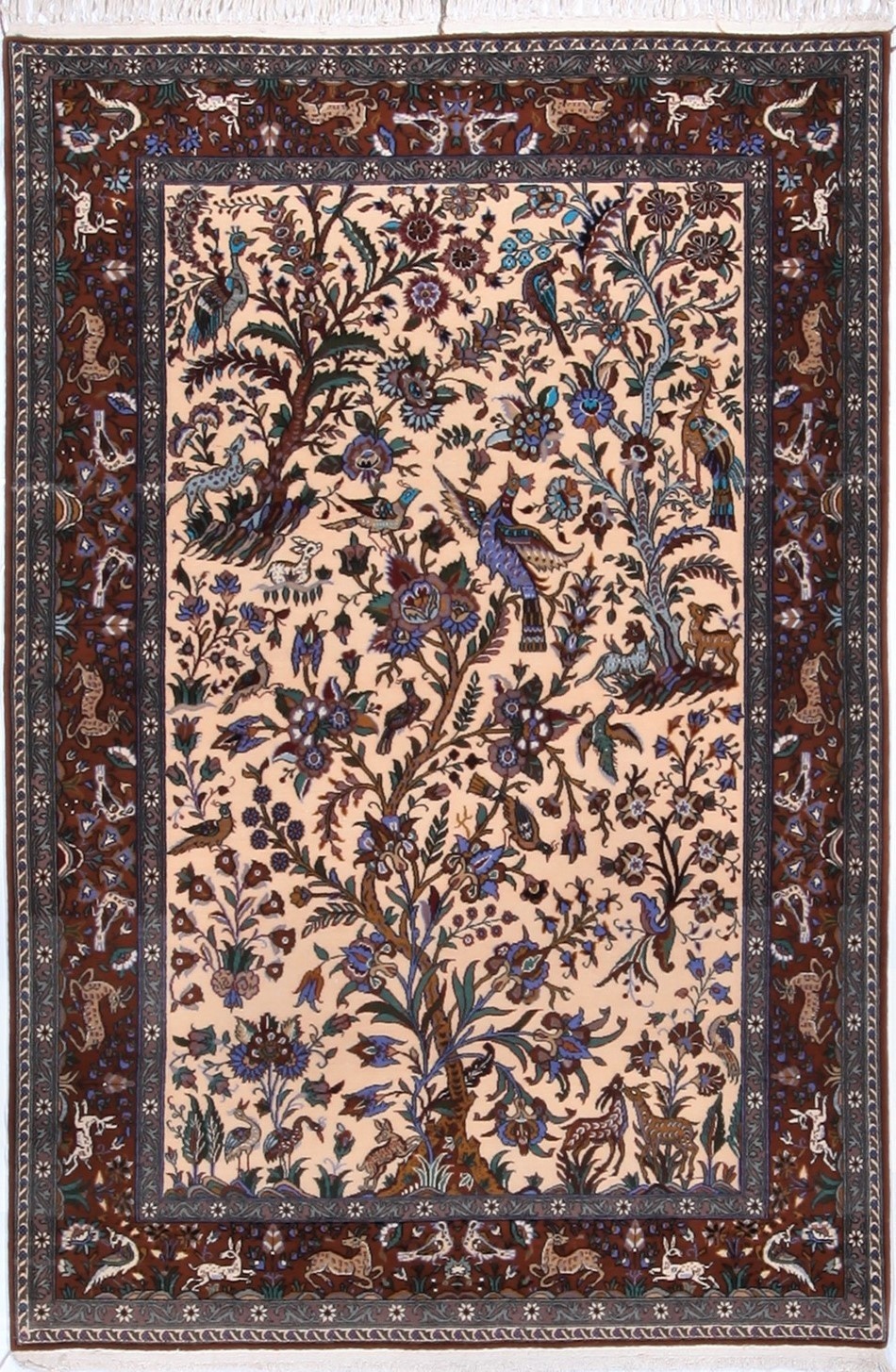 A landscape-shaped rug with landscape design, in which the warps run at right-angles to the long side. Pure silk Qum is among the most highly regarded Persian weavings of the last fifty years and this example is by one of the best-known ustads of the city, which is a few miles north of Kashan. The pale blue of the rocky pool is a particularly pleasing feature, as is the succession of leading and running animals and birds in the main border. Qum rugs are ideally suited for hanging on the wall or laying on the floor. 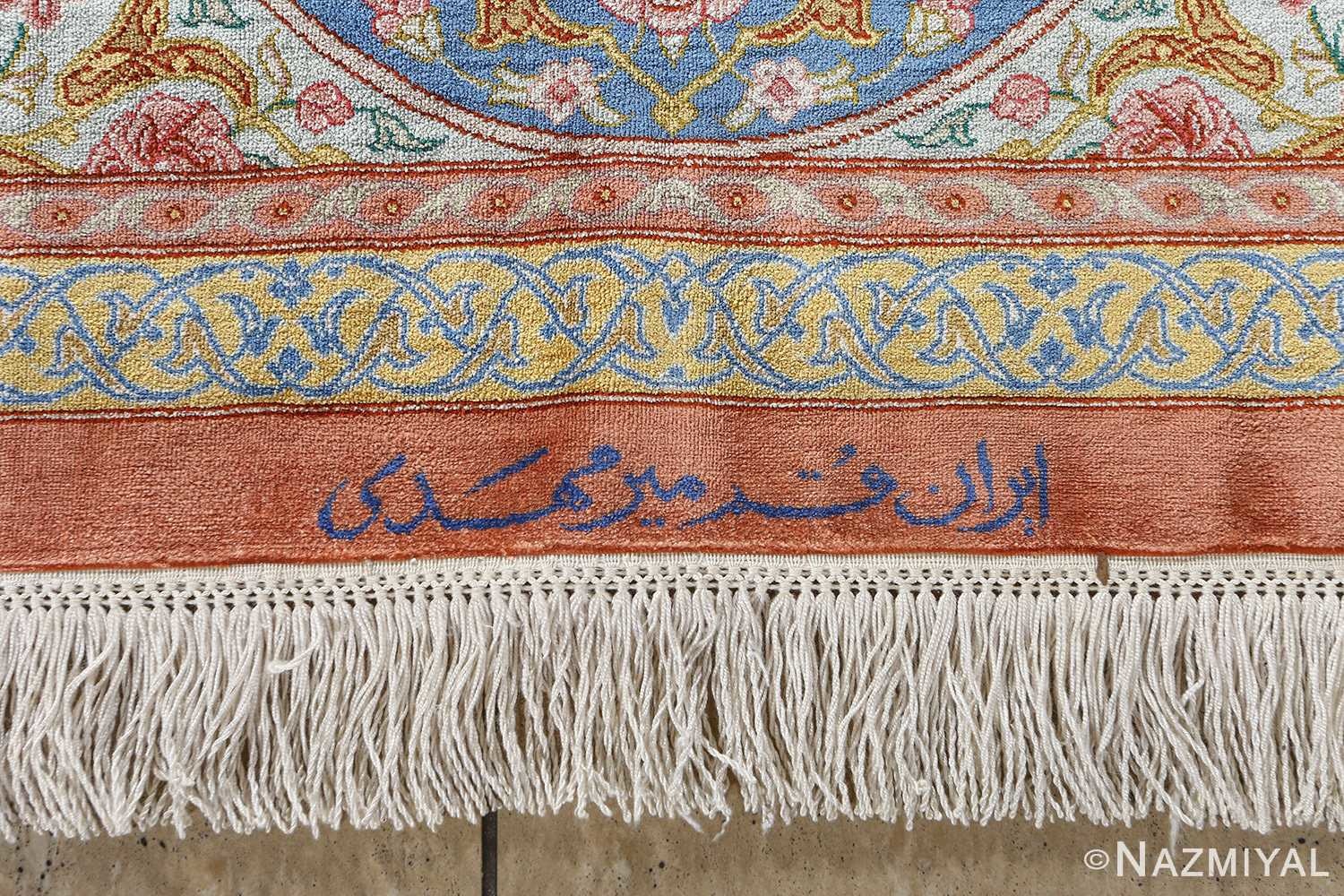