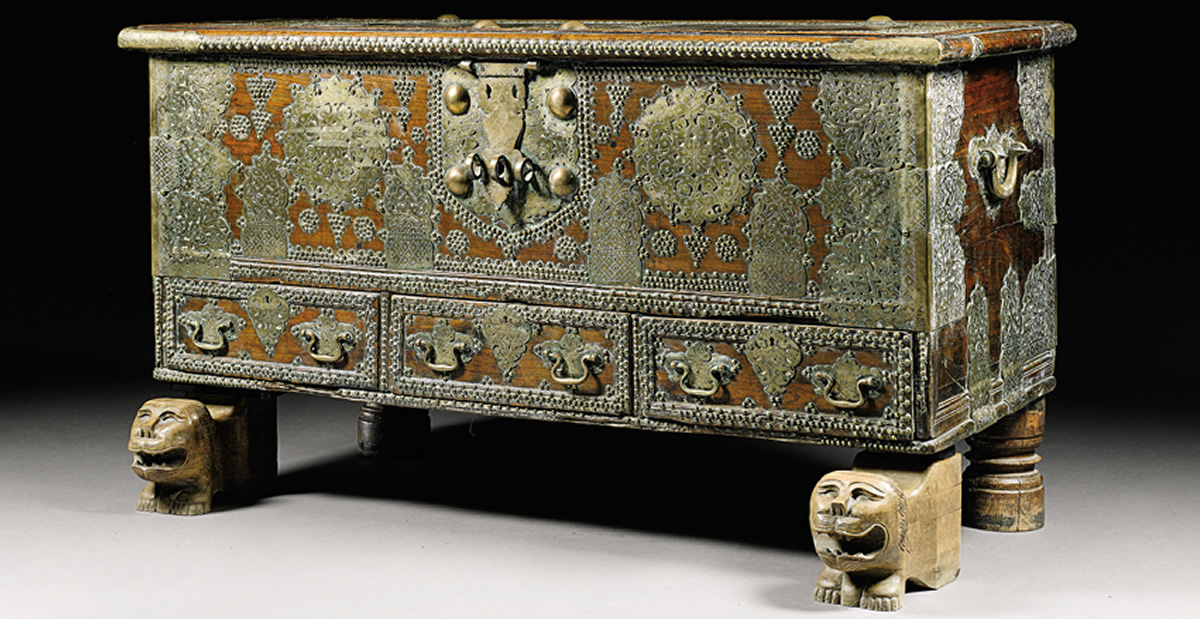 Ask anyone who has grown to love their oriental rug how valuable it is, and the chances are they will term it priceless. Like any other work of art, a rug can be valued in o categories - as a cherished object which has become part of the home or as an item of investment. Also like other forms of art, the two are often hard to separate.

A price, of course, must be fixed if any object is to be offered for sale. In calculating a reasonable sum, the seller will take into account the cost of raw materials, labor, and an acceptable profit margin. The level at which these sums are set depends to a great extent on two factors: cultural traditions and the cost of living,

Historically, nomadic weavers found it difficult to price their wares. The wool came from their own sheep and it was dyed by a member of the family using plants gathered from around the camp.

The idea that a weaver's time might be worth something was a largely alien concept. Therefore, money did not enter the equation until the time came to sell a rug which might have taken years to produce. As a result, the final price was often ridiculously low by any Western standard of market value.

City rugs, woven in factories where the workers are paid weekly and pre-dyed wool is bought as required, have tended to be more realistically priced - but only if judged in comparison with the tribal industry,

The concept of time as a marketable commodity has never been particularly strong in Iran. Had this not been the case, it is unlikely that the slow and painstaking work of the weavers would have continued until the present day. Their reward in the past has tended to be the satisfaction that comes from creating a beautiful object, rather than any financial consideration. 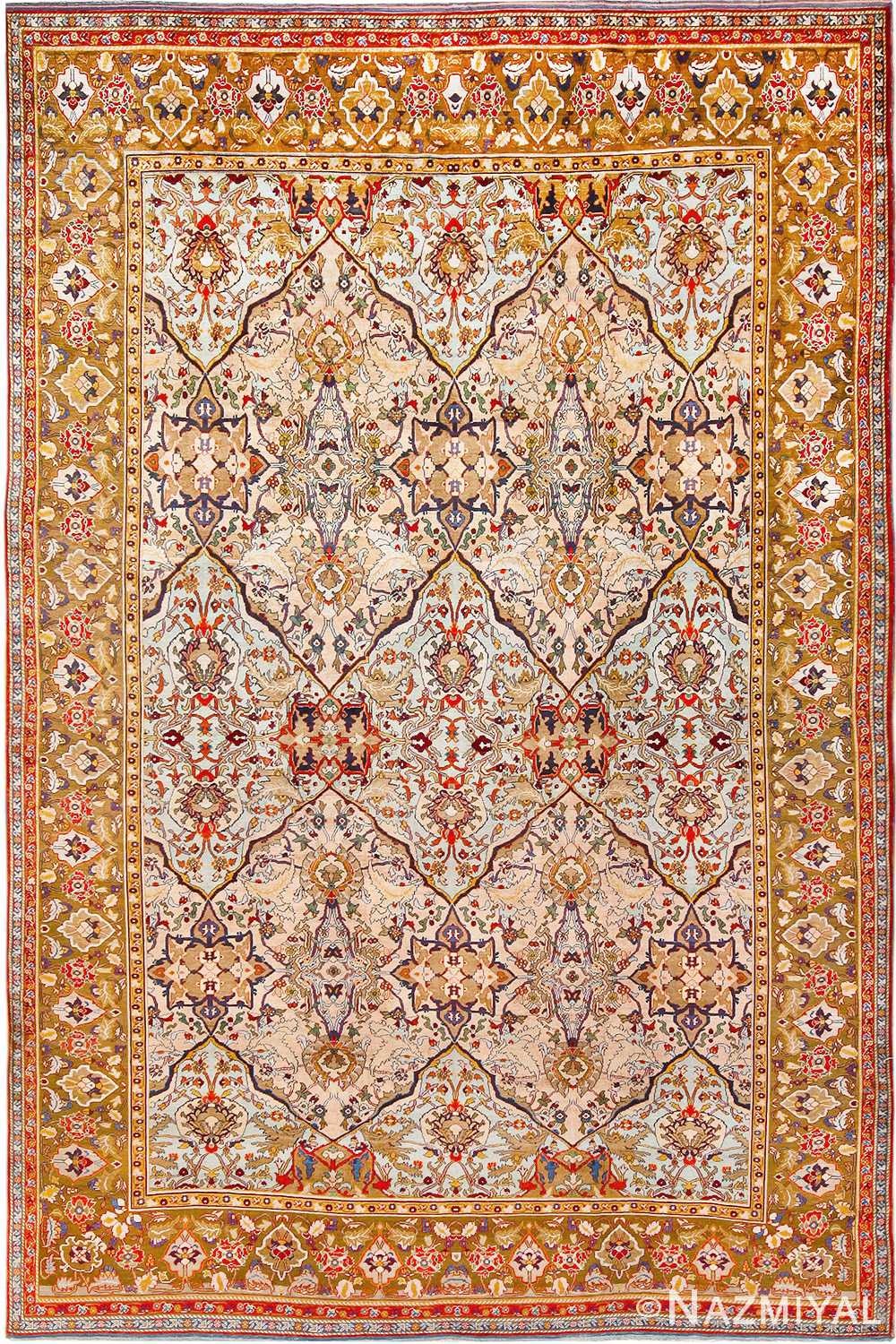 Since many weavers work from home their weekly 'wage' is actually rather difficult to calculate. However, to get an idea of the sum involved, take the example of a standard 6' X 9' Persian rug which takes one weaver about a year and a half to produce. The current market price for such a piece is approximately £1,100. A simple equation suggests that the weaver, therefore, receives less than £14 for his six-day working week. However, the actual sum is even less, since this retail price includes all the interim costs of packing, transportation, and wholesale and retail profits. If that same weaver were to demand an average European weekly wage of about £180, the price of this same rug would rocket to over £13,000.

Take as a more meaningful comparison the example of skilled carpet repairs working in Europe, who currently charges an average weekly rate of £300. Only six in one million of the world's population are weavers.

Of these, about one in three will be Persian and Turkish, the rest being Indian, Chinese, Romanian, and Russian, to give but a few examples. Of the Persian and Turkish weavers, only one in five could be called master weavers. Their work is highly skilled and the returns, as we have seen, are small. Obviously a direct comparison between the wages of an Iranian weaver and a European worker are not particularly meaningful since the real value of a wage depends on the cost of living.

In the past, the cost of living in Iran has been quite low. This is the only reason that weavers have managed to survive on their meager wages. They have never, however, been well off. They live by and large in poor areas or nomadic tent communities. They exist without any of the luxuries which we in the West regard as an essential part of civilized living. Running water and electricity are largely unheard of. These people live at subsistence level. They grow their own food, take meat, milk, and wool from their herds and have few possessions except those necessary for day-to-day life. 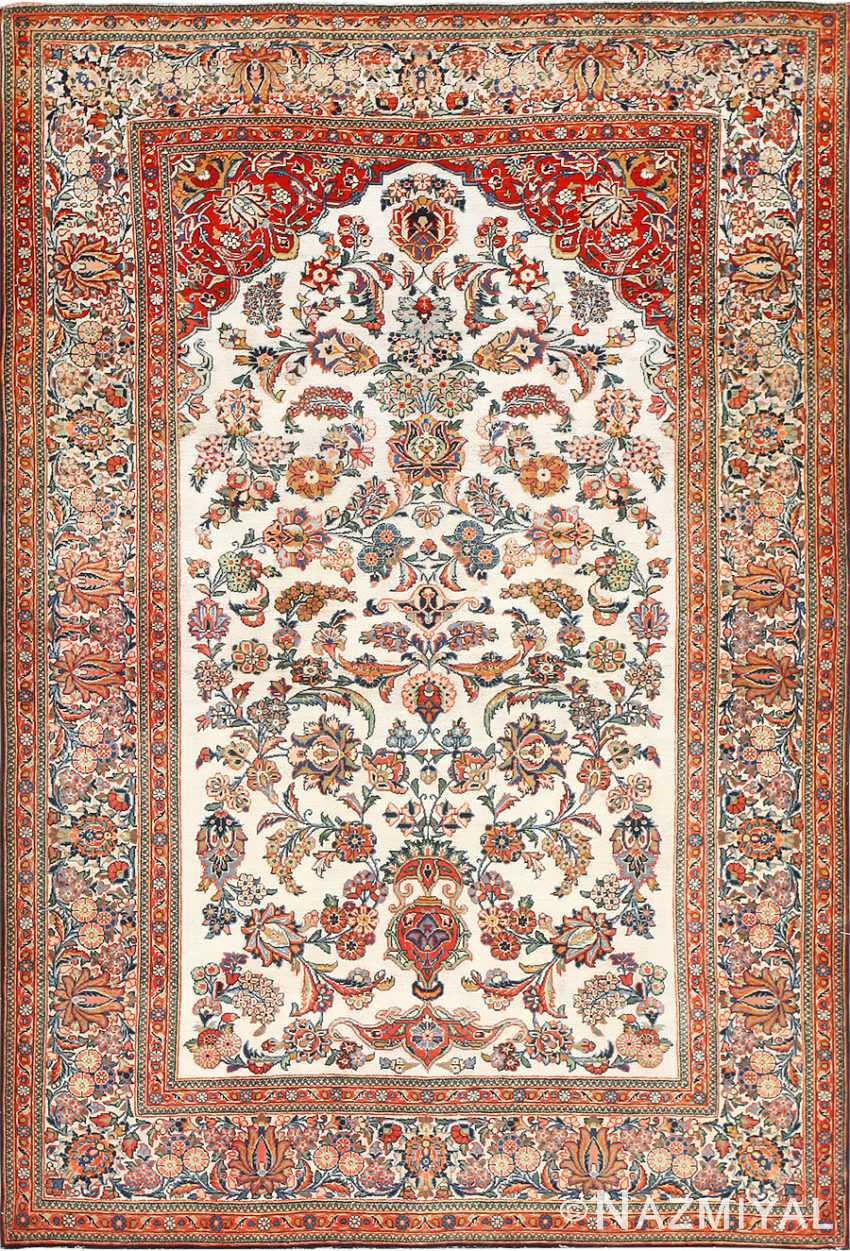 In recent times their condition has been exacerbated by the unstable political climate in Iran, which has led to spiraling inflation, a devaluation in currency, and a consequent dramatic increase in the cost of living.

The main currency units in Iran are the toman and the rial (10 rials = 1 toman). During the last Shah's time, 11 toman was roughly equivalent to £1 sterling; a pint of milk cost two rials. Now there is 250 toman to the pound, and a pint of milk costs 25 tomans. Clearly, if the population is to survive wages must rise significantly - as they have been doing, day by day, even hour by hour.

Weavers, still amongst the lowest paid of all Iranian workers, have also seen an increase in their salaries in response to inflation.

Since it may take many years for a rug to travel from the weaver's loom to the Western market, the inevitable effect on prices has not yet filtered through prices that are forced to rise sharply.

The problem is exacerbated by the number of weavers leaving their traditional profession. As the war-torn country begins to take stock, shattered cities are gradually being rebuilt. Consequently, there has been an increase in the demand for builders, and good wages are offered to lure people into the trade. For many struggling weavers the prospect of a decent salary has been sufficient to make them abandon their traditional work and move to the cities.

It requires only the most basic grasp of the laws of supply and demand to see that this factor will also force the price of carpets up.

In the future, fewer carpets will be produced, and those that are will be considerably more expensive - and probably many will be of a lower quality, as weavers speed up their work to maximize output in an effort to meet demand.

This demand comes not just from the West, where oriental rugs are now highly thought of, but from oil-rich Iranians and Arabs who are buying up high-quality rugs as an investment, to protect their savings from the rapid devaluation of hard currency.

Rugs in the West are currently seriously undervalued since the economic factors take time to filter through. However, the next few years will inevitably see prices beginning to Buying now not only virtually guarantees a sound investment, it may well be the last chance for all but the very rich to own a genuine hand-made oriental piece. A very fine Persian rug now costs something in the region of £10,000; in five years time, its likely value will be in excess of £30,000. These figures are not mere speculation, they are a realistic forecast based on sound facts.

Even at today's prices, oriental rugs are the most undervalued of all art forms - and the fact that they are works of art cannot be questioned. In fact, it would cost more to commission an artist to paint a rug than it would cost to buy the rug itself.

Those who wish to invest in art generally think in terms of paintings, antique furniture, fine china, and silver. Carpets, perhaps because they are walked on, are usually forgotten. When a painting is sold there is an exhibition, people gather and discuss the artist, his influences, and his work. Carpets are never afforded the same treatment. If they were, however, those attending the exhibition would rapidly realize that a carpet is just as complex and interesting an art form as any To really understand a carpet, it is necessary to know something of the weaver, to know why he chose certain designs and colors, even why he was weaving it. The artistic value of a carpet goes far beyond the labor, wool, and silk that went into its making, just as the value of a painting cannot be measured in terms of the paint and canvas it comprises.

Much respect is accorded to fine artists, but weavers have for centuries been almost forgotten. In the sixties, the Shah of Iran did begin to honor the great weavers of his country with gold medals for excellence. As a result fine weavers increasingly began to sign their work and to expect the recognition previously accorded only to painters. But for many years, carpets and their weavers were not talked about, and in the West at least, their artistry went largely unrecognized

Happily, things have changed in recent years not least because the value of fine carpets has been steadily increasing. This investment potential has drawn many new buyers into the field, and once again this has had a knock-on effect on prices as demand has increased. Even so, would-be purchasers should not expect to see immediate profits; rugs should be regarded as medium-term investments, at the very least.

In order to see good returns in the long run, and to enjoy your investment in the interim, it is important to buy the highest quality rugs you can afford. Cheap rugs, like cheap suits, may look good when new, but neither wear well after a few years' use.

Especially if your budget is limited, it is important to remember that the price of a rug, originally at least, is set according to its size as well as its quality. Therefore, it makes more sense to buy a very fine small rug than a mediocre large

Beyond these basic criteria, it should be recognized that certain types of Persian oriental rugs make better investments than others. Light-toned rugs with large areas of plain color will tend to become dirty very quickly, and while general grime can be removed quite easily, any heavy staining will mar the beauty of the piece, and thus its value. You will notice as you visit various carpet shops that though the floors may be strewn with rugs, certain cream and pastel pieces are never laid out. Rugs that cannot be put on a shop floor should not be bought as an investment. If they lose value by being walked on in the shop, they will certainly lose value when subjected to the rigors of normal home use.

the good quality carpet which is well cared for will most certainly prove to be a good investment in addition to being a treasured object of beauty. Consequently, it is most important to have a valuation carried out on your rug for insurance purposes.

Since the value of carpets is constantly increasing, it is necessary to have a revaluation every couple of years.

Only if you have a recent insurance valuation certificate will your insurance company honor the policy in cases of theft, fire, or water damage. Make sure the valuation is carried out by a reputable dealer. You will have to pay for this service, but the price should be no more than £12-£15. It is a small price to pay for the peace of mind which comes from knowing that one of your most treasured possessions is properly insured.