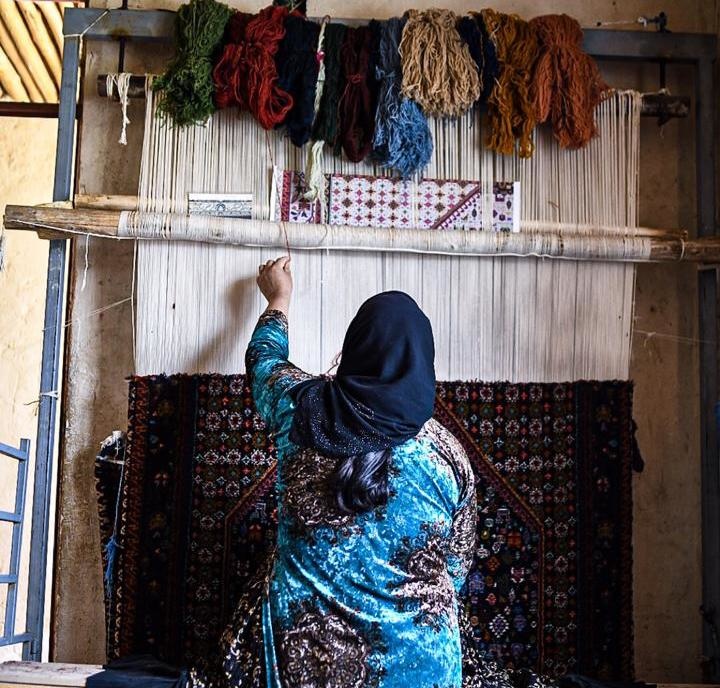 Everyone has heard a story, or seen an exposé, on someone being ripped off on a rug purchase. They were sold an “antique”…when it wasn’t. Or they were sold silk rug…when it was actually viscose or mercerized cotton.

It’s an industry that is similar to the “carpet cleaning” industry in that it’s a small percentage of unethical bad apples that ruins the reputation of the group at large. And just as not every cleaner is a bait-and-switch operation, neither is every rug dealer a bait-and-switch retailer. There are great retailers selling great textiles out there. 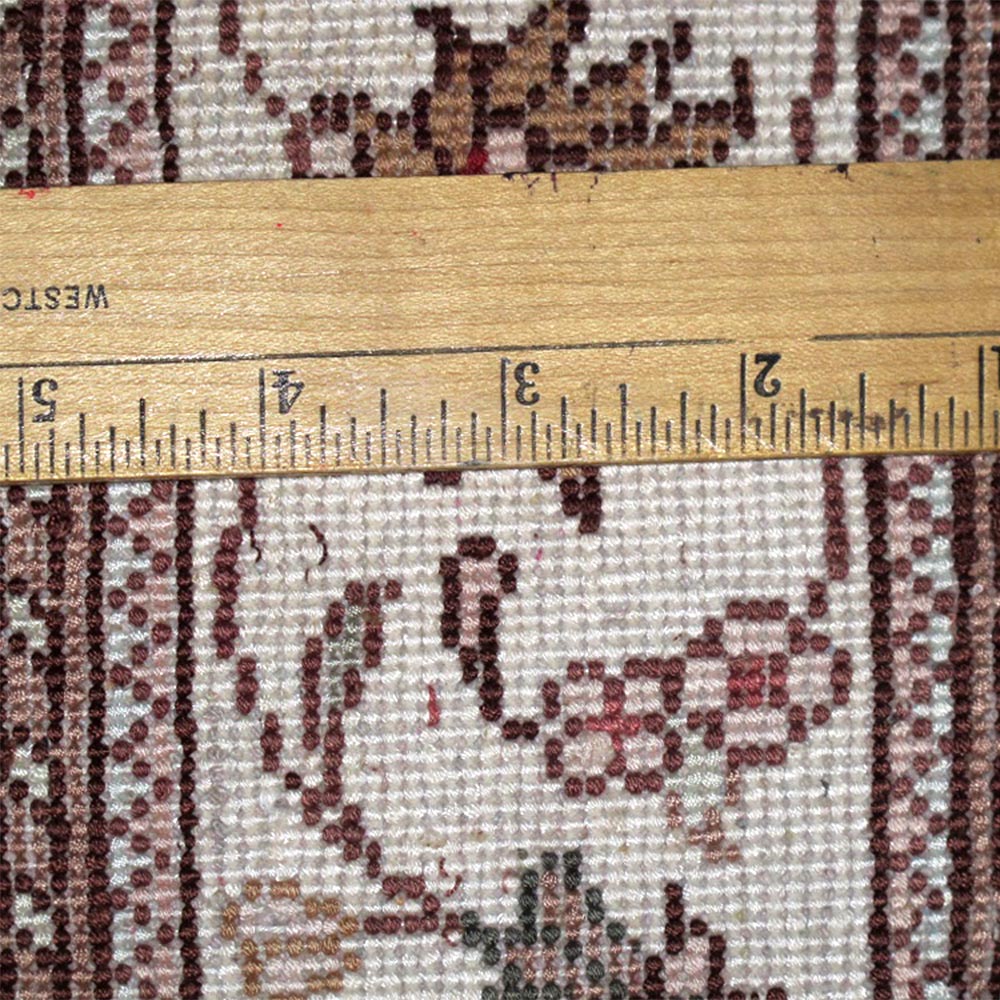 Knot density is found by counting the number of rug knots per square inch, square centimeter, or other unit depending on the country and preferred unit of measure. For this article, we will use knots per square inch or KPSI. When talking about a fine weave versus a coarse weave carpet, the one with the higher knot count will be considered a finer weave, and the one with a lower knot count will be viewed as a coarse weave.

Although some general guidelines apply to all carpets in terms of whether a weave is fine or coarse, it is important to know whether the person is talking about carpets in general or carpets from a specific locality or region. Carpets produced in different areas of the world have typical knot counts for the rugs made in their location.

Also, many of the finer quality “city rugs” are produced in the weaving centers of the world, such as the Persian rug weaving cities of Tabriz and Kerman. These cities have been the home of formal carpet weaving schools since the 16th century.

Rug weavers in the carpet production city centers are trained to produce high-quality rugs with a high knot count and delicate design. For instance, a carpet from Tabriz with a knot density of 400 kpsi would be considered average. It is not uncommon for carpets from this Persian city to reach knot counts into the 1000’s. By comparison, a tribal carpet may range between 50 and 80 kpsi. A tribal carpet with a kpsi of over 80 would be considered fine for that area, but coarse when talking about carpets in general – so it is all very relative. When talking about knot count, you have to be clear whether it is referring to carpets in general or carpets from a specific area. Comparing carpets woven in the weaving centers of the cities to those rugs created in villages is like comparing apples and oranges. They are two different worlds and must be judged against carpets that are similar to them.

Knot count does have to do with quality, but not in the way many think that it does. If one were to take two carpets produced in the same area with a similar design, and all other qualities being the same, the one with the higher knot count would be considered to be the better carpet. A knot count of 200 kpsi in one area may be an example of fine quality weaving, but in a different area of the world, it would not even be acceptable as a beginner weaving student’s work.

The bottom line is this…. When talking about knot count and whether a carpet is coarse or fine, this conversation has to take into account the context and average knot count of carpets from that local area.

Carpets with a higher knot count can include a more intricate design. A higher knot count is more suitable for delicate curves and shading. The coarse tribal rugs often use larger-scale geometric shapes with straight lines. They seldom use round and curvy lines because the knot density is too low to allow for this. This gives the carpet a more rustic and tribal look.

How Long Does It Take To Weave A Better Quality Rug? 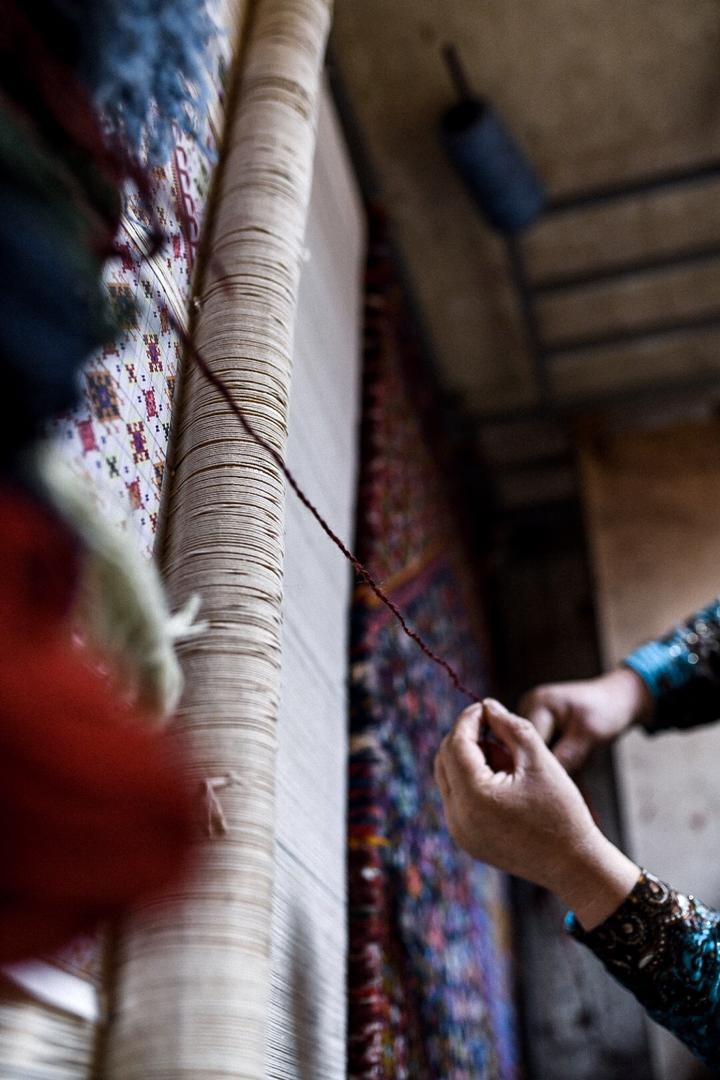 Finer woven quality carpets take longer to weave. A carpet that measures 9-foot by 12-foot and has a knot count of 500 kpsi takes over 12 months to complete. This is with four or five rug weavers working 8 hours a day and six days a week. The average weaver can tie between 4,000 and 8,000 knots in a day. This is one of the reasons for the higher price of finer rugs, but the color and design also play an important role in determining the price.

Just for the record, it is believed that the highest knot count rug ever made was a small 12-inch by 24-inch silk rug from China. It has a knot count of close to 5,000 kpsi. Among larger carpets, there are several that claim to have the highest not counts in the world. Currently, it is thought that a Hereke, which also happens to be a prayer rug, housed in the Metropolitan Museum of Art holds the record with a knot count of 4,360 kpsi. The carpet took over 14 years to produce.

How Do Commercial Carpets Measure Up?

Now that you understand a little bit about how quality rugs and handmade carpets compare to each other, let’s take a look at some commercial carpets. By commercial carpets, we are referring to those that are made entirely by high-speed machines. Commercial carpets are measured using the “face weight”, also known as the “pile weight”. This measurement reflects the ounces of yarn is used to make a square yard of carpet. Typical commercially made carpets range between 16 and 40 oz per yard.

Commercial carpets usually have a short pile and high-density. This allows them to last longer under heavy foot traffic. They are often made of synthetic fibers such as viscose, nylon, acrylic, polyester, and olefin. There is stiff competition to increase quality and there are some carpets that are now available which have up to 100 ounces per square yard. In general, the higher the face weight, the longer the carpet will last.

Now you understand a little bit about knot density and how it plays a role in the quality of the rug. In general, when talking about hand-knotted carpets, the higher the knot density, the more intricate the pattern, and the longer the carpet can be expected to last. With commercial carpets, the same is true, but when it comes to the feel under feet, commercial carpets can never compete with a nicely made hand-knotted quality rug.

We at Shabahang Rug Gallery have a large selection of hand-knotted carpets in our collection in a range of knot densities. However, we encourage you to look beyond the knot density when it comes to evaluating the carpet that is right for you. The most important factor is that you fall in love with it because you will have to live with it for many years to come, in the most likely circumstance. Finding the perfect rug for your space and that appeals to you is always the best criteria for choosing the right carpet for you.